Dallas Ducar, one of HOCC’s Board members, is the founding  CEO of Transhealth Northampton. Transhealth Northampton (THNH)was created to provide the best possible medical and mental healthcare for transgender and gender-diverse people close to home. They created the organization because of a lack of resources and health care dedicated to the transgender community  living in western Massachusetts.

THNH was built to empower trans and gender-diverse adults, children, and families through clinical care, research, education, and advocacy.  Transhealth is a trans-led organization inspired by, and in service to, an under-served community. HOCC too is built to empower the under-served community of all women living with, affected by, and at risk for HIV. HOCC is for women, by women, about women and is a nurse-led /  peer-driven organization.

What is exceptional about THNH, is it will provide trans and gender-diverse people of all ages in Western Massachusetts the full-spectrum of clinical services including primary adult care, pediatric care, gender-affirming hormonal care, and mental healthcare as well as a range of non-clinical services to support the  community.

Dallas inspires “a big vision to change the world of healthcare so trans and gender-diverse adults and kids are empowered and celebrated as they work with an affirming team to own their personal healthcare journey”. HOCC believes in Dallas, and knows that with her behind this project along with THNH’s amazing team, this vision is definetely attainable! Best to all!

Gender-affirming care offers a model for all of health care

Protestors in support of transgender rights gathered outside the Alabama State House in Montgomery, Ala., on March 30. Gender-affirming health care for transgender people is not a scientific argument; it’s a moral argument. JAKE CRANDALL/ASSOCIATED PRESS

A patient once told me how she was forced to live in the world as a man, after having come out as a woman years earlier. Let’s call her “Sara.” She had to “retransition” because she could not find a psychiatric provider willing to write a letter granting her permission for surgery and did not feel safe as “a woman with a beard living on the streets.” My patient was a victim of a cycle of discrimination that started with a lack of access to basic gender-affirming care, leading to a lifetime of substance abuse, mental struggle, and an inability to find a place to call home.

As a transgender health provider, I’ve been shocked by the endless barriers that exist for patients seeking to transition. For cisgender individuals, hormone replacement or even puberty blockers are easily accessible and have been used to treat precocious puberty, and hormone replacement therapy has been beneficial for numerous endocrinological, cardiovascular conditions. Transgender people, however, are burdened with paperwork, psychiatric assessments, and insurance pre-authorizations. Cisgender people in power — politicians, clinicians, administrators, academics, and insurance company executives — have traditionally created systems that reduce access to quality gender-affirming care.

As a result, transgender people have been locked out of American society, its norms, its power, its resources. Frequently, politicians argue as to whether transgender Americans should exist. But while they play cruel politics with people’s lives, there is a quiet revolution below the surface that shows attitudes are changing.

Transgender people are gaining prominence — from leading roles in Hollywood to senior appointees in the federal government. Those changes are being felt by the next generation of youth, who now identify as transgender in record numbers.

Systems must be built that are dedicated to advancing gender-affirming care, and institutions must be created that are inclusive by design and sustain this movement.

Gender-affirming health care for transgender people is not a scientific argument; it’s a moral argument. Sara and I pleaded to her treatment team for this simple right to be recognized. This eventually was debated and agreed to, but by this time it was too late, she had discharged herself to the street without access to care.

In a country that recognizes that “all are created equal,” trans rights must be recognized as human rights, including a right to health care that treats them as they are. This means continuing the trend toward integrated and holistic health care systems that don’t pathologize people. It means a system that helps parents understand and support their trans children, one that brings them together. It means having a doctor who understands Sara.

Some politicians have dystopian fantasies about a “trans agenda,” where we supposedly force boys into dresses, and girls out of them. This misses the truth and beauty of gender-affirming care that affords each human being the freedom to be who they are, and parents the rare insight to better connect with their children. Such care is a rebuke to those who tell others how they need to act and behave. It instead says, “We value you for who you are.”

On May 4, Transhealth Northampton is opening a clinic to solve these problems from the ground up. It will be the first standalone trans medical and mental health care organization in the nation. The first to be led by the trans community and for the trans community. The first in a rural landscape. The first to place funding behind clinical care research, education, and advocacy.

We need people dedicated to this at the front line of care. Gender-affirming care requires staff wholly dedicated to noticing new ways in which health care can be liberating.

The victories that lie ahead, big or small, will not be about trans rights specifically but about advancing human rights. These victories will extend far beyond our community. Gender-affirming care offers a model for all of health care, one that is patient-centered and based on the human story. It’s time to create a system that includes people like “Sara” and show America what health care can be. 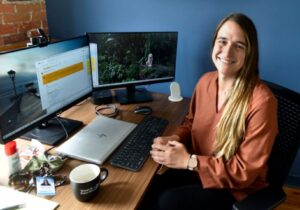 We Want You to Know: Governor Baker announced that Massachusetts face-covering order will be rescinded May 29!

Face Covering Guidance On Monday, the Baker-Polito Administration announced that Massachusetts will lift all remaining COVID-19 restrictions and rescind the state’s face covering order effective May 29. The Department of Public Health will...